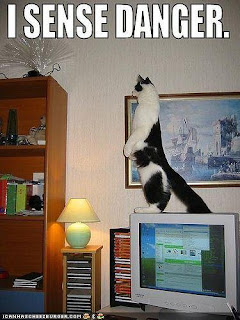 A veterinarian once told my husband, after he assured her that his housecat did not need a rabies shot, that ALL pets, even those who were indoors-only needed to be vaccinated because (and I quote) “a rabid bat could fly down the chimney and bite your cat”.  Instead of being terrified by this horror-movie-like visual, my hubby simply rolled his eyes and filed the suggestion in the same category with tsunami insurance for Iowa residents and life jackets for dolphins.  He still declined the shot.  Since his cat had almost died from a seizure following her last rabies vaccination, he decided to take his chances with the bat.
Since then, the vet’s warning has become sort of a euphemism in our household for the ridiculously implausible.
Me:  “What did you do with that scorpion I found in the bathroom?”
Hubby:  “Took it outside.”
Me:  “How FAR outside???  What if it crawls back inside during the night and climbs up into our bed and stings me???”
Hubby:  “Oh yeah, and what if a rabid bat flies down the chimney and bites you?”
Me:  “Point taken.” 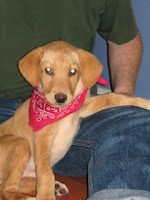 And we laugh and consider ourselves clever.
Well, recently, Hubby and I got a puppy.  His name is Uno and he’s AWESOME.  (See visual proof of his awesomeness to the right.)  Even though he is only 11 weeks old, he is already, hands down, the best puppy in the world.  No hyperbole.
Anyway, ever since we brought Uno home, the warnings, cautions, suggestions, and advice have been flooding in.  Apparently danger lurks around every corner when you are a defenseless little canine.
On the one hand, we are told to be very cautious with our puppy until he is four months old.  He hasn’t had his rabies shot yet.  He is not yet completely immune to doggy diseases.  The ground is teeming with germs.  Parvo can live in the soil for up to a year.  He could step in another dog’s poop, lick his own paw and die a terrible death.  Best to keep him away from any area any other dog has ever or might have ever set foot in.  Yes, your best friend’s dog may be healthy and have all of her shots, but what if SHE has been around dogs who HAVEN’T?  Are you willing to take that risk?!?! 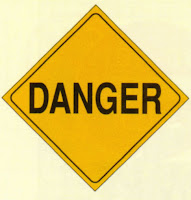 On the other hand, we are told it is SO important to properly socialize our puppy before he is five months old.  He needs to meet other dogs.  He needs to experience new places.  Fears set in at 20 weeks.  He needs to be exposed to every type of surface, temperature, noise, smell, and weather condition.  He needs to be around cats, birds, squirrels, deer, horses, rabbits, and llamas.  He needs to meet humans of every age, size, gender, and race.  He needs to interact with people wearing hats, sunglasses, masks, scarves, vests, and hoop earrings.  How will you feel if your dog gets to be six months old and he is terrified of elderly Asian men wearing bow ties?!?!
It can be a bit overwhelming.
Still though, we try to take it all in stride and find a happy balance between disease risks and socialization phobias without becoming paranoid parents. After all, the idea of a bat flying down our chimney or a rabid dog sneezing on our front porch is preposterous. 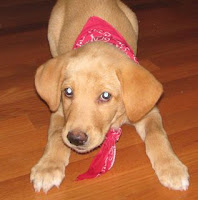 Or so I thought.
Last week I stopped into a pet store which, for the purposes of this blog, we will call MegaPet, to buy some chew-deterrent spray.  (It did not work.  However, this does not denote a lack of awesomeness on the part of my puppy – See second pic for further proof of his awesomeness – it instead denotes a lack of awesomeness on the part of the product.  This face can obviously do no wrong.)
Anyway, I was standing in line behind a woman buying a medium-sized, brown, cushy dog bed.  This was the middle of the afternoon and the store was nearly empty.  The only people around were me, her, and the male teenager behind the checkout counter.  It was a slow day at MegaPet.
While Teen Boy was swiping the lady’s credit card, she was reaching down into the plush recesses of her new doggy bed, when suddenly she said, “Oh!  I don’t think the bed was supposed to come with this!” and she lifted up out of the crevasse… a dead mouse.
Teen Boy and I just stared while Clueless Lady held the thing by the tail and said stuff like, “Looks like I got an added bonus!  Almost walked out of here without paying for this!”
I ventured to ask, already knowing the answer to my question, “Is that a dead mouse?”  To which she replied, “No, it’s a toy.  Looks real, though, doesn’t it?”  And I thought… yep.
Clueless Lady set the dead rodent on the counter next to my bitter apple spray, then, seeing my look of concern, thought better of it, picked the thing up AGAIN, and set it on Teen Boy’s cash register.  Then she stood there, cluelessly waiting for her receipt.  When she noticed that Teen Boy and I could not stop staring, jaws dropped, at the thing on his cash register, Clueless Lady finally got a clue.  She gasped and said, “Is that a DEAD MOUSE!?”  We both nodded. 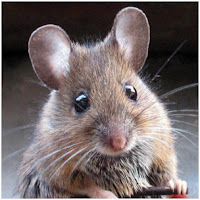 Now I must admit, once Clueless Lady got a clue and realized that she had, in fact, been waving a dead mouse around for the past couple of minutes, she handled herself very well.  She demanded (and received) a new dog bed, thanked Teen Boy, and hastily escaped to her car, where I can only assume she got a huge case of the heebie jeebies and doused her hands in antibacterial gel.  Meanwhile, back in MegaPet, I watched as a very dismayed Teen Boy picked up the dead mouse with a dog food coupon, and threw it, along with the contaminated dog bed, in the trash.  I’m pretty sure MegaPet has no data on this incident whatsoever.
I left the store with my ineffectual chew deterrent and a bewildered expression on my face.  What boggled my mind more than the fact that I just saw a grown woman play with a dead mouse was the idea that maybe there was something to the whole bat theory after all.  I mean, if I had bought that bed for Uno and NOT rummaged around in it before bringing it home, he could have found the dead mouse, eaten it, contracted some horrible dead mouse disease, and gotten sick or died without me ever even knowing what had happened to him.  It was a sobering thought.
But still, you can’t live your life in fear.  Yes, there is danger everywhere.  There are diseases in the soil.  There are mean people in the world.  There are rabid animals.  There are poisonous plants.  There are fast cars. There are dead mice in dog beds.  There are germs, germs, germs on every surface everywhere.  But everything should be taken in moderation, including safety precautions. Our goal is to raise a healthy, well-adjusted puppy while avoiding becoming “the people who fear the bat in the chimney”.  And we do this by following a few simple rules.
** Keep up with regular vet appointments and vaccinations.
** Take puppy to safe, clean areas to socialize with friendly people and healthy dogs.
** Be cautious of high-traffic dog areas until puppy is older.
** Keep fireplace doors closed at all times.
** Thoroughly inspect all items purchased at MegaPet.
And I think we’re doing pretty well, because our pup is AWESOME.  Seriously.  Look at him. 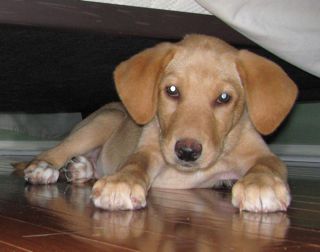 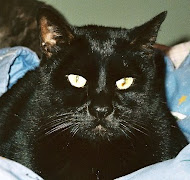